BoSSIES: People are Doing it for The Strandveld

The BoSSIES project was started in 2007 as a partnership between the Zandvlei Trust and the City of Cape Town. The idea was to plant indigenous species along local sidewalks with the aim of reconnecting people with – not just nature as it is, but nature as it once was here.

Cape Flats Dune Strandveld used to cover just about all the land between the mountains and the sea around us, but most of it has been lost to urbanisation. Much less than half the original extent of this now highly endangered vegetation type remains, with only about 14 percent of that conserved. A good example of the success of the earlier plantings is along Axminster Road, near Thesen’s footbridge on the southeastern side of the estuary outflow in Muizenberg.

In times past the vegetation around here attracted animal herds and provided enough grazing for the VOC to establish Het Posthuys in order to protect the cattle herds it kept around the “zand vlei”. (At the time of the first British invasion the post holder was one Sergeant Muys, standing guard in the shadow of Muysen se berg).

The typical structure of the Dune Strandveld includes numerous evergreen trees and shrubs, bulbs, restios and grasses. The most common trees are milkwood, sea guarri, Cape camphor, candlewood, wild olive and coastal silkybark. The most common large shrubs are blombos, bietou and rhus dune current. In springtime smaller plants including species of geraniums, sour figs and many types of daisies paint the surroundings in a multi-coloured palette and provide forage for many birds and insects. 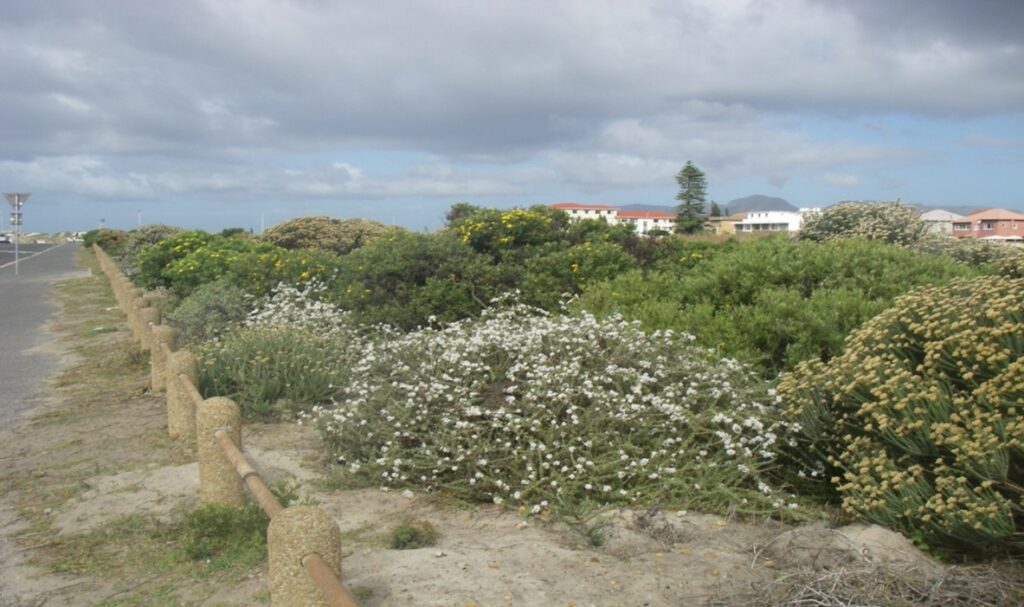 The BoSSIES indigenous Strandveld planting along Axminster Road in Muizenberg

In truth the BoSSIES wagon hit a major pothole some years back and went wheels up. However, it has recently been restored to good running order by FynbosLIFE volunteer Helen Mitchell, along with help from the Zandvlei Trust (both are NPOs, or not-for-profit organisations).

One of Helen’s priorities is to plant locally indigenous material along Main Road in Lakeside (more or less the roadside opposite Pick-n-Pay and the Lakeside fire station) with the aim of linking the Westlake Conservation area with the natural vegetation on the mountainside and the vlei margin.

The dream is that in time local residents will take up the call and begin planting indigenous Strandveld sidewalks and converting their own lots from “English country gardens” and water unwise and labour intensive lawns into wildflower paradises. Imagine! Helen has plans to award “fynbos champion” plaques to people who plant indigenous pavements and gardens in our area.

From time to time we, members of the Zandvlei Trust, as well as any and all other local residents will be called upon to assist not only with BoSSIES planting events, but also to fund the plants and plantings themselves: plants need to be purchased, the sites must be prepared, and our volunteer cannot live on bread and fynbos alone. For the record the name is an acronym for Biodiversity of Suburban Sidewalks for Indigenous Ecosystem Sanctuaries.

If you are in a position to assist this project financially it would be most appreciated – any amount would be welcomed. Please make payments to the Zandvlei Trust, Nedbank account number 1030882339 (branch code 198765). Please mark your contribution “Bossies”. – Peter Kruger