View from the Chair

I arrived in Cape Town, green and eager to read for an environmental sciences degree. I had grown up swimming and fishing in the river where we lived (still a green belt somewhere north of Joburg). I was shocked to see kilometre after kilometre (between 200 and 400 kilometres, I believe) of concrete sluices here that were called rivers (looks like a sewer, use it as a sewer).

I made it a resolution to do something about it “before I died”, but between then and now came jobs and marriage and children and all that. About a decade back I came to live on Zandvlei and experienced all the woes of our “captured” rivers. Over time I joined the Zandvlei Protected Areas Advisory Committee (ZPAAC) and the Zandvlei Trust, the Sand River Catchment Forum and more recently Friends of Zandvlei, more determined than ever. 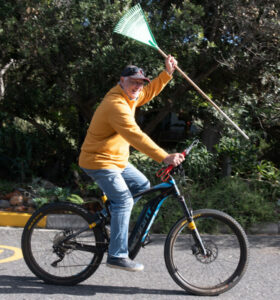 But it was frustrating, seeming to have to fight a City Hall that cared virtually nothing for the bigger environmental picture, and we were pushing water uphill with a rake (as my partner described it). Did they not see the children of the Cape Flats playing in the fetid sluices that ran past their back yards; did they not care? Of course there were people working for the city who had green interests, but theirs were lonely voices echoing around council chambers of a bureaucracy that preferred concrete and tar to rivers and parks.

For several years now there have been council employees working to push their own waters uphill – Joanne Jackson who is the driving force behind the city’s Source to Sea venture, greening some of the upper catchments. And Andrew McDonald who has steered the Liveable Urban Waterways through rough waters of his own. (I confess, until recently I was a loud critic of these two projects, because they had been focused on the already green upper reaches of our rivers in what I called “the Porsche belt”.) But things change.

A year ago I was some 40 years closer to dying than when I first saw Cape Town’s river malaise. I was beginning to despair and contemplating packing in all dreams of a better future here. I’d even gone scouting for a new place to put down roots far away. Then something most untoward started happened just a few months back.

Then suddenly, it seemed, there was a seismic shift in City Hall. Have you also noticed, all around the city, council workers are doing a most unexpected thing – working! Wherever you go now you can see teams cleaning and painting and repairing and cutting and clearing like nothing I have ever seen before. I went downtown recently and the place was cleaner than I’d seen it for many years. It’s like someone in the council had flipped a magic switch and all of a sudden “the city that works” actually did.

Simultaneously our new mayor Geordin Hill-Lewis and his inner circle of new, young and energetic councilors have been hosting public meetings all around the city explaining their plans for a clean water city and doing another eye-opening thing – actually asking the public for opinions and even to comment on their performance. He said the slow degeneration of our rivers and wetlands, along with an aging and failing sewage network, over the past several decades was a “wicked thing”.

Fixing it all will be a massive task, it will take time and it will cost lots of money, but the plans and the budgets have all been approved and work has started – if only in the conceptual stage right now. Most exiting for us is the Liveable Urban Waterways project. As I write this I have just returned from a roadshow where Andrew McDonald and team revealed their plans for rejuvenating the Zandvlei catchment (all the rivers and streams that flow into Zandvlei).

It will start with five pilot projects that will be in time, inshallah, rolled out across around the entire city. These include upgrades of sections of the Grootboskloof, Spaanschemat and Prinskasteel, Keyser and Westlake river systems. But far the most important so far as I see things, is the Sand-Langvlei project.

Phase One is to create a wetland “bio-filter” just below the Sand-Langvlei confluence, that will be designed to capture all forms of pollution – litter, chemical, sewage – before it reaches the vlei. And while it will not return perfectly clean water to our vlei, it will be vastly better than what we are currently being subjected to.

Thus far consultants have been appointed to drive the conceptualisation process, which will include further public and expert input. By the end of this year that consultation process should have been finalised. Next year is scheduled to be devoted to designing the wetland. All going well, implementation (the actual construction work) of the wetland should be carried out in 2024.

Phase Two (there is as yet no timeline for this) is the restoration of these two rivers – digging out the concrete riverbeds, softening the banks and greening the areas alongside. However, between the dream and the reality lies an obstacle course of paperwork and government legislation that has to be negotiated. We trust our city representatives will be in shape for the big event.

At one meeting Hill-Lewis said it was his dream that by the end of his – hopefully – second term in office, he would be able to swim in the Milnerton, Zeekoevlei or Zandvlei lagoons without fear for his health. I say we make it a date and join him there.

It feels like, for the first time in four decades, I can go to sleep knowing that the dream for a green-water city will soon start to materialise and we will once again have rivers where once rivers used to be. Just imagine!

In the meanwhile we need to work on the responsible city officials to put in place a system of litter traps in those canals so that we don’t have to try to grab it before it gets into the vlei. As an acquaintance put it: it’s the kind of thing a farmer could do on a Saturday morning. Like rust, the Trust never sleeps.