Litter Matters: In the Net 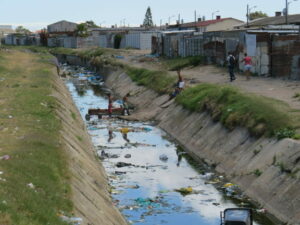 As we go to press the CoCT is installing channel-wide nets in the Lotus River canal to catch the storm of litter that washes down that neck of the Cape Flats and into Zeekoevlei. If you thought our litter problems were bad you’ve not seen what washes down the Big and Little Lotus Rivers!

Good news is that, following an on-site meeting between Zandvlei Trust members and the city’s Water & Sanitation and Nature Conservation representatives, we have heard that similar nets are to be installed in the Sand and Langvlei channels, upstream of our nets and the council’s metal litter grilles. While they won’t stop the garbage being dumped (that’s a battle for another day), it will give us a chance to clear them out much sooner.