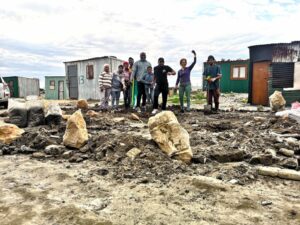 After months of procrastinating (mainly about how to secure a garden space in an informal settlement where anything of material value that is not bolted down grows legs), Vrygrond resident Neville Williams’s dream of creating an indigenous garden in his hood materialised on what was previously a rubbish tip. 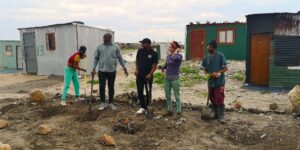 Ground was broken in early July, quite literally, given the material that had to be dug through. Ncguncgu Sunbird Project commander-in-leaf Ceini Smith arrived with a bakkie load of flowering fynbos  and together with Neville and his small team of volunteers put in the roots of what we hope will grow into something special in that area. Already, as we go to press, Neville is planning the first extension to Garden One.